This essay was a piece of work I had in collage and due to its relevance to this website, i decided to post it here. Enjoy!

The Science fiction or Sci-Fi genre, is the genre takes place in an alternate reality and is about the future. It’s different to fantasy as it make us believe something by putting it in a context which is familiar while fantasy suspends our disbelief. Sci-fi is iconic due to it’s themes of futuristic technology and modern day manipulation of what’s real, in other words it deviates us from what is real and drops us in an unknown reality but extremely familiar.

The one thing that sets Sci-Fi apart is its ability to present an ideology to the audience from an emotionally neutral standpoint. All media and genres can present a moral in a story, however, Sci-Fi takes place in a context in which is feels real without actually being real. A good example if this is the film “Avatar”, by James Cameron: Avatar is about humans who come to the planet Pandora to get the priceless element known as ‘Unobtanium’. Pandora is a very dangerous planet with intelligent natives called the ‘Na’vi’ who are unhappy with the extreme and selfish actions of the humans. The film has striking parallels to the European colonisation of America and their treatment of Native American tribes. If the film was just about greedy European settlers being horrible towards Native Americans, audiences would already have an emotional connection to one of the groups in the story: European Audiences might feel uncomfortable about the behaviour of their ancestors and angry towards what the writers presentation of Europeans and studios are famously terrible at presenting any ethnic group which aren’t white and a quite prone to whitewashing the action of particular individuals. A similar film (although not Sci-Fi and made for children) is “Pocahontas” the film’s message was rather distorted by the poor presentation of European settlers and quite insensitive presentation of the American tribes, many Native Americans were upset about how many creative liberties Disney took with Native American Culture in the film.

Sci-Fi also provides a platform to voice future unforeseen issues, like in “Back to the Future” warning viewers on the dangers of time travel. Films like “Mad Max use a common theme which has less of a focus on technology but puts us in a post-apocalyptic world with gangs and fear lording over everyone. This theme tends to have a message to warn people of the future, normally of things like global warming. Another film to use the apocalypse theme is “28 Days Later” however this includes the disease outbreak theme reminding us of how weak the human body truly is. Sci-Fi loves

to use of technology, the best way to have this is with the unforgettable robot. “I,Robot” has this and is a clear Sci-Fi with people relying on robots.

Robots are a favourite of the Sci-Fi genre; sometimes they are a gimmick or part of the message that human’s use will rely on them too much. In early Sci-Fi films, it wasn’t uncommon for the Villain to be a Robot. 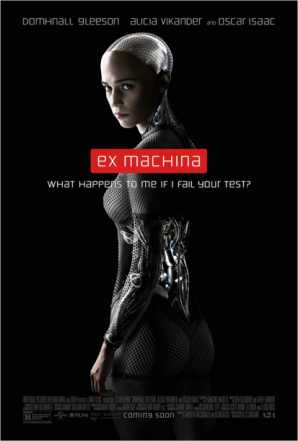 Possible one of the most philosophical robot movies is “Ex Machina”, with the film asking if its possible that robots will ever be as able to think like humans. Time travel has always been a common theme, “Back to the Future” bei

ng an unforgettable example The way Sci-fi is written means that they tend to fall into two categories: Utopia and Dystopia; Utopia is where everything is good like in “I,Robot” and Dystopia is where everything is Bad like in “Mad Max”, Due to the way messages are put forward, most Sci-Fi is Dystopia this theme of bad and good worlds is frequent to all science fiction

Early Sci-fi was normally about things considered not a threat by today’s standards. Fear of automation was normally a theme, which in the present is considered normal however one could argue it’s still present in the form of peoples fear towards robotics and AI. Communism was a frequent theme , normally it was shown in a negative light however there was the occasional film supporting the ideology. Generally Sci-Fi in the past took a more drama styled narrative as special effects weren’t easy or good enough to make some of the more complex monsters and as audiences didn’t like more action driven films.

Metropolis was made in 1927 by Fritz Lang and was the first feature length Sci-Fi film. Although being called “silly” by H.G.Wells (one of the fathers of science fiction) and the Encyclopaedia of Science Fiction calling its politics “ludicrous”, the film is widely considered ahead of its time. The film uses very future; at one point a character uses a phone (which also had a screen), the film has a smart woman in a position of power. The landscape has has some epic city-skapes and constructed overpasses going round huge towers. The film at the time had mixed reviews because of its message. The film preaches a very left wing socialist view of the workers being oppressed by the ruling elite and the ruling elite not realising the power and the strengths of the united workers. The film also warns of mob mentalities and the strength of anger. The film was made in Germany before World War Two when political extremes were popular and ever increasing as well as Hitler himself gaining popularity. The film was revolutionary in terms of techniques but unpopular. Ironically, Hitler loved the film although it doesn’t support his ideology.

In the 1920’s there weren’t many Sci-Fi films as they not to popular and generally, film wasn’t very accessible. In the 1930’s, it was believed Sci-Fi wasn’t going to survive not only in film, but in literature as a general. Sci-Fi only really existed in low budget films; some low-key science fiction elements existed as a plot devise in horror in the form of a mad scientist or a monster. Towards the end of the decade when the situation in Europe began to look worse and more extreme as Hitler and his Fascist regime took momentum, Sci-Fi began to take be more prophetic and speculative standpoint like in “Metropolis”. The 40’s was a bad decade for film in Europe due to the war effort and lack of money; due to this most films were made in the USA. Films at this time had strong patriotic and national themes with strong anti-fascist and anti Nazi standpoints. The films of the period were horror themed and had a good hearted mad scientist, Boris Karloff was a popular horror movie actor who played multiple Mad Scientists around the late 1930’s and early 1940’s; staring in movies like “The Devil Commands”. 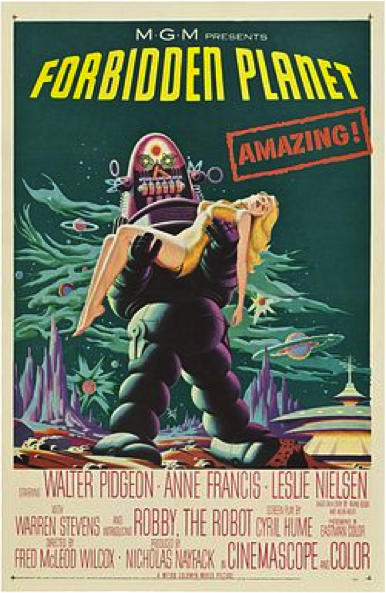 The 1950’s were considered the beginning of the ‘classic era’ of science fiction; most films drew upon current issues in the world and public fears. These include fears of the Soviet Union (involving nuclear annihilation and invasion), identity and strength was popular and loss of the personal was a recurring theme. Films at the time were most popular amongst the teenage years, the films had a exaggerated,comic feel and seemed to have either a helpless woman wearing rags slumped in the arms of a robot or dangerous strong independent woman with broad shoulders doing something “crazy” like being in a position of power! For the last 20 years before 1960’s

America had been the main distributer of science fiction but now there are more countries were getting involved; Britain, Japan and Italy had growing film industry creating classics such as “the Day of the Trifids” and “Godzilla”. From the 1940’s to 70’s there is a recurring theme of existential danger from beyond Earth (which arguably still appears in cinema’s today). This theme is most potent here due the fear of the cold war between the Soviet Union and the USA; it reflects the fears of immigrants and foreigners. In the 1970’s Sci-Fi became more popular winning significantly more awards than previous years, most likely due the hype of the moon landing in 1969. Classics like Star Wars and Superman were made, both rated highest grossing films of their respected years. “2001 a Space Odyssey” was made and has a large amount of visual effects. The first film of my favourite franchise was made, “Mad Max”. 1970’s onwards Sci-Fi developed its style and became what it is today, especially with the improvement of VFX.

Big modern day Sci-Fi actors include Bruce Willis, known for films like “the 5th element” and “Looper”. He tends to star in more mainstream films and action movies. Ron Pearlman stars in more low budget movies and does quite a bit for TV, he’s been in “Pacific Rim” and “Hell Boy” as the Hell Boy Himself. Sigourney Weaver is well known for her ‘No Rubbish’ style and has been in “Avatar” and multiple “Alien” movies. She was the first relevant female lead in an action film; this was arguably met by not met by resistance due the film being Sci-Fi. Ryan Robinson has been in “Apollo 13” (although not being a Sci-Fi had many Sci-Fi themes) and captured the true fear of the true story of being in a broken spaceship. He is also known for “I-Robot”.

I love Sci-Fi and the themes it contains the potential it has for giving a warning or presenting a possibility in literature or film.

I watch films and review them, make art with a bit of a story. i want to go into the film industry but im still thinking a bit. View all posts by artfilmwriting